Situated in the Liaohe River Delta which is about 30 kilometers southwest of Panjin City is the mesmerizing Panjin Red Beach. It is the largest and best preserved wetland in the world and transforms from lush green into a crimson red hue during autumn. The red color of the sea is attributed too a seep weed called seablite which grows along the seashore bringing a red color as it reaches maturity.

Panjin Red Beach also dubbed as the “red carpet beach” for tourists and locals alike can see nothing in the area but red. The enchanting tourist destination is nestled on the Shuangtaizi River Estuary just outside of Panjin City and spans over 51 square miles of coastal land. The wetland is regarded as a protected field, also a haven to more than 260 diverse kinds of birds which includes the endangered red-crowned crane as well as around 400 species of wildlife. 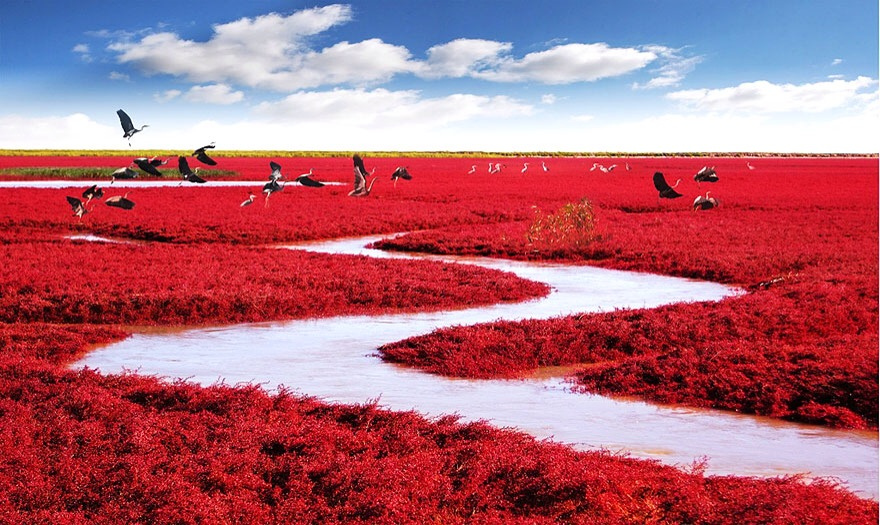 The soil on the coast is relatively saline which is conducive for seep weed to live but other plants cannot thrive in this condition. During winter, the weeds die down and regrow in spring.

A number of eager tourists flock the beach over the years. Owing to its extraordinary red color as well as the largest winding waves of reeds, it is regarded as a pure ecotourism system with a perfect blend of beautiful, natural scenery and captivating landscape.

RMB15 million had been invested to the Red Beach with the building of a reception center and a dock. Facilities available in the reception center include a hotel, restaurant, hot spring bathing, meeting house, multi-functional hall, and others.

The beach is also called “House of the Cranes” as you can find here endangered Crowned Cranes and Black Beaked Gulls. To maintain the whole eco system safe, the Red Beach was granted state level protection back in 1988. Most sections of the beach were closed to the public but there is a small area that is open for tourists.

The Red Beach in Panjin is a magnificent scenic spot and a green eco-tourism place where tourists can go sightseeing and do other kinds of leisure as well as enjoy the resorts. The Red Sea Beach Wharf is a 1000 meter long boardwalk protruding to the sea. You can stroll along the boardwalk or immerse yourself with the stunning red sea beaches. 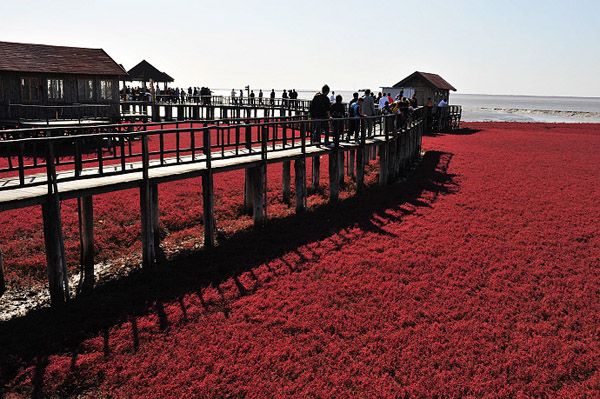 Watching cranes on marsh is also an enjoyable activity to commune with nature. You can have the opportunity to mingle with the rare crowned cranes and other birds. The wetland park is also coined as “Crescent Park” mainly because of the ancient water course having the shape of a crescent. Experience the surreal tranquility of the primeval nature as you boat around the maize of the reed marsh.

The Red Sea Beach Resort is where you can find a group of traditional style buildings with one main building as well as 7 single villas.

The best time to travel in the Red Beach in Panjin, China is during the months of May to October.