Oases have often been associated with mirages, as a fruit of the imagination of completely exhausted walkers in search of a few drops of water to survive… Well, rest assured, the Huacachina oasis is not one of those! 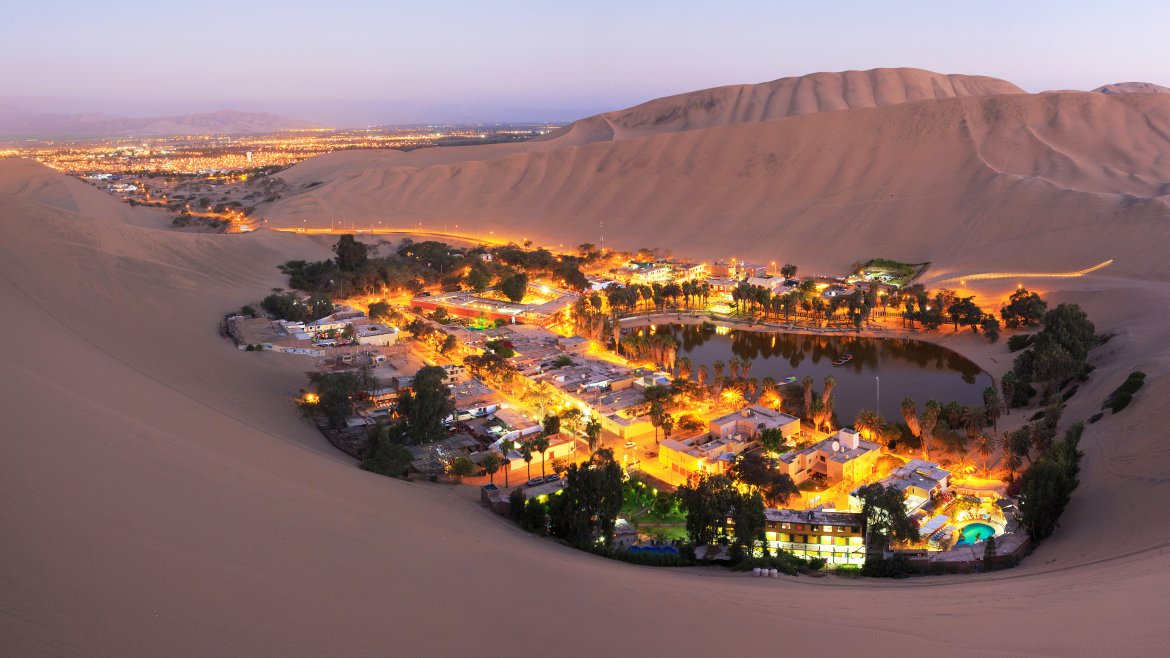 Huacachina, The Oasis and The Lagoon.

This is a traditional resting place for the inhabitants of Ica. From above, the lagoon appears like a mirror surrounded by majestic dunes, palm trees and acacias. Some locals attribute to its waters curative properties. According to tradition, Cachiche was a village known to be pullulating with witches, who treated all sorts of aches and pains. The palm with seven heads can still be observed, a popular name that was given to the palm tree with one main trunk and other six sprouting from it. Legend has it that long ago a young princess was surprised by a hunter while she was trying to swim in the lagoon of Huacachina. She fled the scene forming behind her, with the folds of her cloak, the fabulous dunes encircle today the oasis. That might be just a myth, yet Huacachina does have a fairy-tale touch to it.

Lost on the way between Lima and Nazca, Huacachina is an oasis surrounded on all sides by gigantic dunes, sandy vastness that is much more massive than what you could ever have imagined arriving at the door of this place. We are in the southwest of Peru, in a little oasis of a hundred inhabitants, built around a lagoon with green water imprisoned by white sands of the desert. This oasis owes its origin to the flow of underground streams. Its lush vegetation and its exceptional microclimate offer you the opportunity to live a unique experience, full of mystery. This haven has adapted to tourism constraints in order to thrive and endure in time and especially stay in this unusual place. Palm trees are reflected in the calm waters of the lagoon and the dunes are the highest in the world, measuring between 300 and 400m height. Thus, Huacachina gradually became a very popular tourist destination with its own attractions and activities around the huge dunes of the Peruvian desert. The village, near the city of Ica, has also become an inescapable stage for hikers.  Discovered in the 1940s, Huacachina is a resting site particularly valued by Peruvians. It is also one of the favorite places of former Peruvian President Augusto B. Leguia. You will find luxury hotels of charm and comfort, restaurants, walking paths surrounded by ficus trees, acacias and huarangos. But Huacachina is not only a place to relax and indulge the delights of sunbathing, Huacachina is above all a privileged place that will allow you to climb the dunes in a crazy and speedy buggy and then go down in the surfing! You will experience unusual emotions, even, why not to, feeling you are the king of the desert when you pass the dunes in wind speed. You capsize and savor the curves the dunes offer. Whether by buggy or on a surfboard, each dune passed and each pose, captivate you by the gradient colors of orange and gold of this extraordinary immensity of sand. 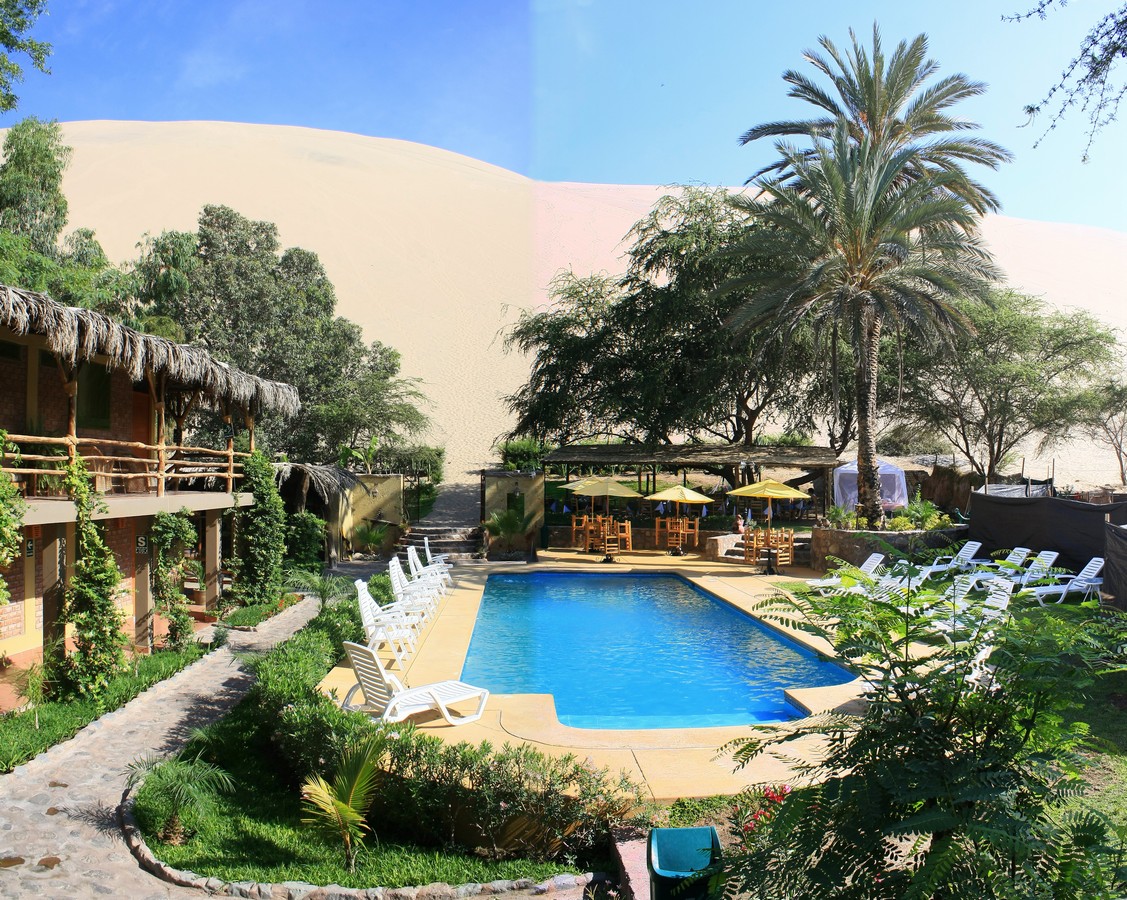 The lagoon of Huacachina is a tiny and charming oasis in the desert about 8 kilometer from the city of Ica and a hundred km east of Paracas National Park and about 300 km from the capital Peru, Lima.

How to get to Huacachina

From Lima, head to Paracas. From there, you have the choice to take the Cruz del Sur bus or, if the schedules of the bus don’t suit you, you may take a shared taxi. You can even share a van with 5 or 6 other people, if you are in a group. Whether by taxi, bus or van, they will bring you to the bus terminal in Ica, located on the main avenue of Ica. In fact, you can offer the driver a tip and ask him for a small extension of a few kilometers (5 km in total) so that he brings you directly to Huacachina without going the trouble of finding another taxi. For the way back to Ica, expect to pay around 5 NE for a taxi.

Like snowboarding, but on sand (or sand surfing), this is a main sport in Huacachina oasis. To do it, you just have to rent a surfboard at one of the available shops in the oasis, and then climb up the dunes then just slide to your heart’s content. With sand surfing there is a lot to say. The more experienced do it standing on their board. Those who have never done it before, but still want to take the opportunity to have an adrenaline push, lie flat on their stomach. Sure, you will have sand everywhere in your body and cloths, but it’s worth it! You also may chose to leave shortly before nightfall, so that you can enjoy the magnificent sunset over the dunes. 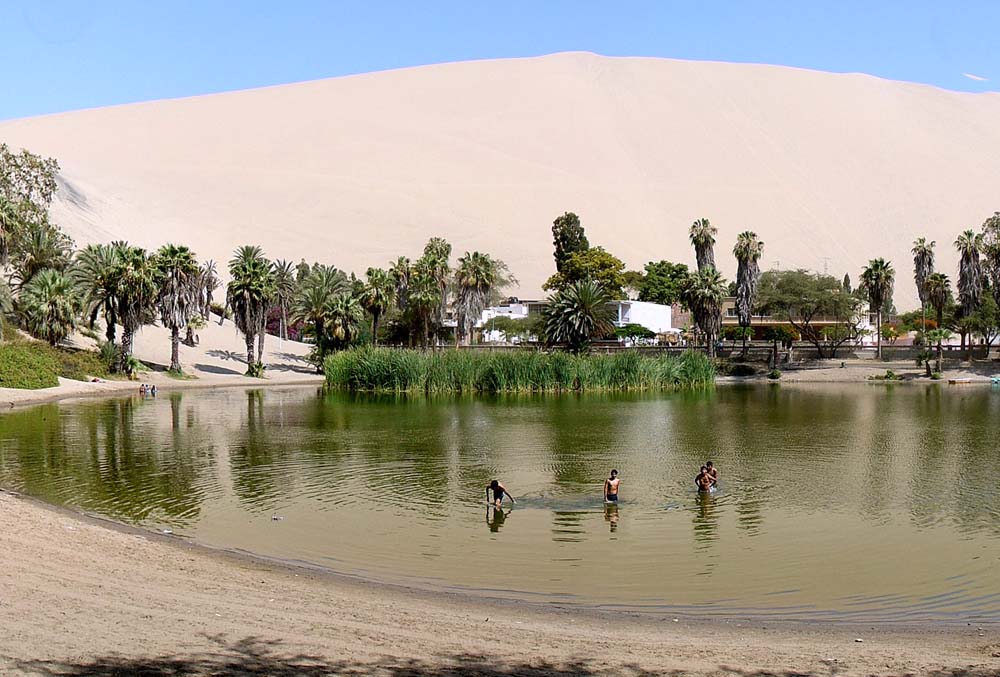 You can opt for a tour in a buggy around the dunes; it is very easy to find an agency, a hotel or someone offering a buggy tour in Huacachina. The tour lasts about 2 hours. With a professional driver at the wheel; buckle up and get ready to be transported in this green machine that looks like it was stripped out from a science fiction story. And there begins a crazy race that will last more than half an hour during which the only sounds you will hear are those of the machine … and your laughter. At 50 mi per hour, the buggy follows the curves offered by the dunes, giving you the opportunity to climb up and down, stopping at the top of several dunes to find the best spot to admire the view or do more sand surfing. Expect to pay around 35 NS per person for the buggy tour.

Huacachina is inseparable from Ica which, in turn, is inseparable from the Inca and pisco, an iconic drink of the country meaning in local language “bird”. Ica is also the site of a legend concerning the Inca Pachacutec. It is said that he fell in love with a virgin girl from the Ica Valley, but the young woman’s feelings were not for him and all his seduction efforts did not make her change her mind. Pachacutec, as a parting gift, however, decided to bring running water to the village of the girl. For eight weeks, thousands of Inca men were mobilized to dig the main canal of Achirana, which is still used today to irrigate the crops in the valley. Enshrined between gigantic dunes, Ica, about 50 meters of altitude, is spared from the coastal brume. All year round under blue skies and a radiant sun, the city is a floral oasis thanks to the river running through the valley, the Inca canal and modern irrigation that has developed. From the onset of colonization, Spaniards, especially the monks, discovered and soon settled in this fertile valley. In 1540, Francisco de Carabantes introduced vines the first time in the region. Several monasteries were responsible for producing wine for the needs of the offices of the Catholic churches in the New World. If the first Spanish city in the valley was destroyed by an earthquake, today’s Ica saw its monasteries transformed into modern wineries or boutique hotels. But it still keeps a special atmosphere, very different from that of typical wine regions. Sometimes it has a touch of the “Wild West” when, under their broad straw hats, men cut through the rows of vines, mounting their Peruvian pasos, a proud horse of Andalusian roots. Some other attractions in Ica to check out are:
The Cathedral of the city of Ica

This Cathedral was built about two centuries ago and was reconstructed in 1814 after it had been damaged. The exterior of the temple is of neoclassical style and, inside, the baroque style is predominating, from the decorations on the walls, furniture and to the windows.

This museum houses a wide selection of highly valued items of many cultures that populated the long history of the region; such as the Inca, the Nasca and Ica civilizations.

Here, they make the famous drink “pisco” using traditional means, like alembics made during colonial times. There are dozens of artisan wineries in the valley of Ica alone, among which, Mendoza, Catador, Sotelo, and Alvarez, are the most reputable ones.

Huacachina oasis deserves your time and effort. If you decide to make it one of the stops during your trip to Peru, it will offer you the opportunity of an incredible excursion to discover the insane landscapes of the desert region; to share its wonders and mysteries; to live incredible moments and meet the wonders of this country as soon as possible, especially as urbanization developments there threaten the delicate balance of this unique environment.