The enormous and historic Puente Nuevo or “new bridge” is the most emblematic monument in the city of Ronda, one of the lovelies and most historical towns of Andalucia situated in southern Spain.  Ronda, Spain is undoubtedly one of the most beautiful and unique cities in the world. Sitting atop a sharp hillside in southern Spain is the monumental bridge. At the time of its construction, it was the third bridge in town and that’s how it got its name, “Puente Nuevo”. This eclectic and impressive stone bridge from the 18th century spans the narrow and deep gorge that separates the town of Ronda in two.

Puente Nuevo had been constructed between 1759 and 1793, crosses the Tajo de Ronda, a 100- meter deep gorge built by the river Guadalevin. Ronda’s iconic landmark is best viewed from the Camino de los Molinos which runs along the bottom of the gorge. Two other bridges, Puente Viejo or “old bridge” in Spanish, and Puente Romano or “Roman Bridge” exist even this present time and are used for pedestrian traffic.

The foundation of the colossal bridge is comprised of local rocks and it has a smaller middle arch where the river passes through. Explorers can discover rooms from the upper portion which were used as prisons in the past.

Construction of Puente Nuevo started in 1759 to replace the old bridge that collapsed in 1740. Several architects were involved in the construction and one was Jose Martin de Aldehueta. It took about 42 years to build it and was said that 50 builders died during its construction. The enchanting beauty of Puente Nuevo is attributed to the blending of details which dates back to the 18th century. The eccentric idea of building a bridge over 120 in deep canyon in Ronda, Spain came from King Felipe V of Spain.

Puente Nuevo had been used as a prison port for about 3 years during the Civil War. It also became a torture room each time the local army caught some opponents.  Stories have it that some prisoners were also put to death by throwing them from the windows to the rocky bottom below. These modern times, the iconic bridge is a museum, an Interpretation Center where tourists can check the rooms, its awesome architecture, and the amazing view towards the El Tajo gorge. 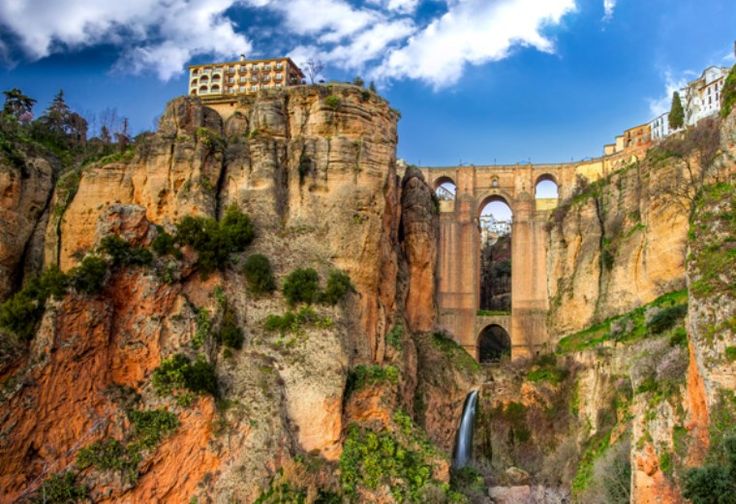 The chamber of the bridge can be reached through a square building which serves as the guard house before. These days, it houses an exhibit depicting the bridge’s history and construction.

The city of Ronda’s undeniable strategic location attracted major forces in the Peninsula before Rome became an empire. You can also find that there are Moorish buildings which were preserved.

Set amidst a rocky environment, this amazing masterpiece with tall, narrow arch and high piers has an impressive and captivating appearance. It is claimed as one of the most photographed man-made structures in Spain.

For explorers who opt to travel back in time and discover great historical treats, visiting the iconic Puente Nuevo while in Ronda, Spain would truly be memorable.