The ancient town of Myra in Lycia, Turkey is famous for the great ruins travelers can discover there. The most spectacular of all attractions are the rock-cut tombs of the ancient Lycian necropolis with two burial sites, the river necropolis and ocean necropolis bearing eclectic frontages reminiscent of classical temples.

Myra is the major city of the Lycian Union which surpassed Xanthos in early Byzantine times to emerge later on as the capital city of Lycia, Turkey. The origin of Myra’s name is uncertain and was believed to be a modified version of a Lycian name like Tlos and Patara. Because of a devastating plague that swept through Anatolia, Myra lost roughly one-third of its population along with Muslim raids, flooding, and earthquakes. Myra was mostly abandoned by the 11th century and what remains is splendid – a large theater with the amazing backdrop of Myra’s popular rock-cut tombs. 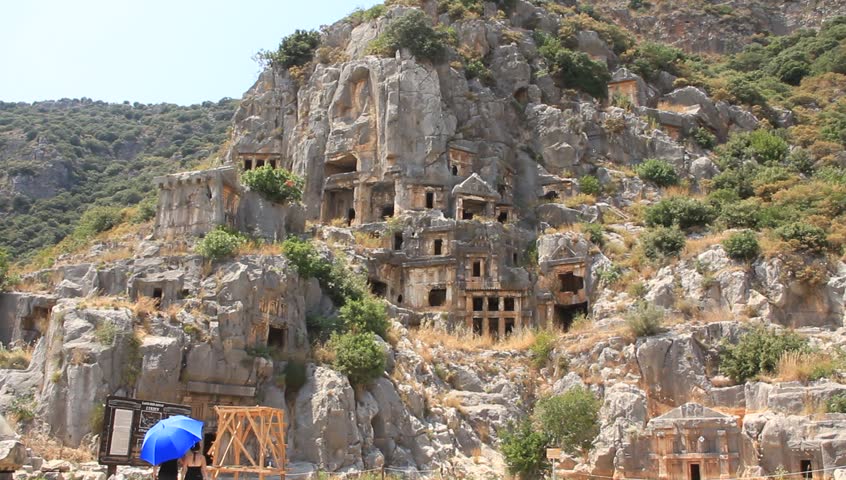 The stunning rock-cut tombs of Myra are categorized into two main groups; one is above the theater while the other one is a place called the river necropolis situated in the eastern side. Charles Fellows stated upon his discovery of the city in the year 1840 that he found the tombs to be painted in red, yellow, and blue, although what we can see today is just a plain set of tombs.

If you get to explore the western side of the theater, you can find that the steep cliff is blemished with a vast number of closely packed rock-cut tombs artistically designed in an asymmetric pattern. A few of these are temple tombs and adventurers can see steps carved out of the rock that lead to them. Most of the ancient tombs go back to the 4th century BC with a number of them containing funeral scenes in relief, and scenes in the everyday life of the deceased. At the eastern side of the hill are tombs which resemble those next to the theater. “The Painted Tomb” is one of the most striking all around Lycia which the usual house-type tomb is bearing the outstanding feature of a group of eleven life-size figures in relief.

For centuries, the city of Myra situated in the heart of Lycia on the southern side of Turkey, served as a pilgrimage destination for Byzantine Christians. The 4th-century bishop of Myra, later canonized as St. Nicholas (and famous for “Santa Claus”), influenced the development of the Christian city before his traditional funeral at Myra. For over 1500 years, the church of St. Nicholas has stood out as an icon of the Christian saint’s influence in a place marked by the mammoth remains of the earlier Greco-Roman Lycian population.

Present time archaeological activity at Myra has begun to depict a notably intact Christian city underneath modern Demre. While the church of St. Nicholas, the honeycomb tombs and the theater continued to be iconic symbols of the Lycian coast, the majority of the ancient city was buried under 18 feet of sediment deposited by the nearby Myros River.