In Taiwan, each year, the whole country shares the commitment to the tradition of lanterns. In temples like in offices, stores or train stations, they are everywhere. Bursts of colors and poesy, they hold wishes for the New Year: happiness, health, prosperity, love… The lanterns are also pretexts for many major festivals, among them, that of Pingxi that is undoubtedly the most original and most moving of them. Pingxi’s Lantern Festival is one of Asia’s most iconic festivals and an event to which millions of tourists flock to attend every year. 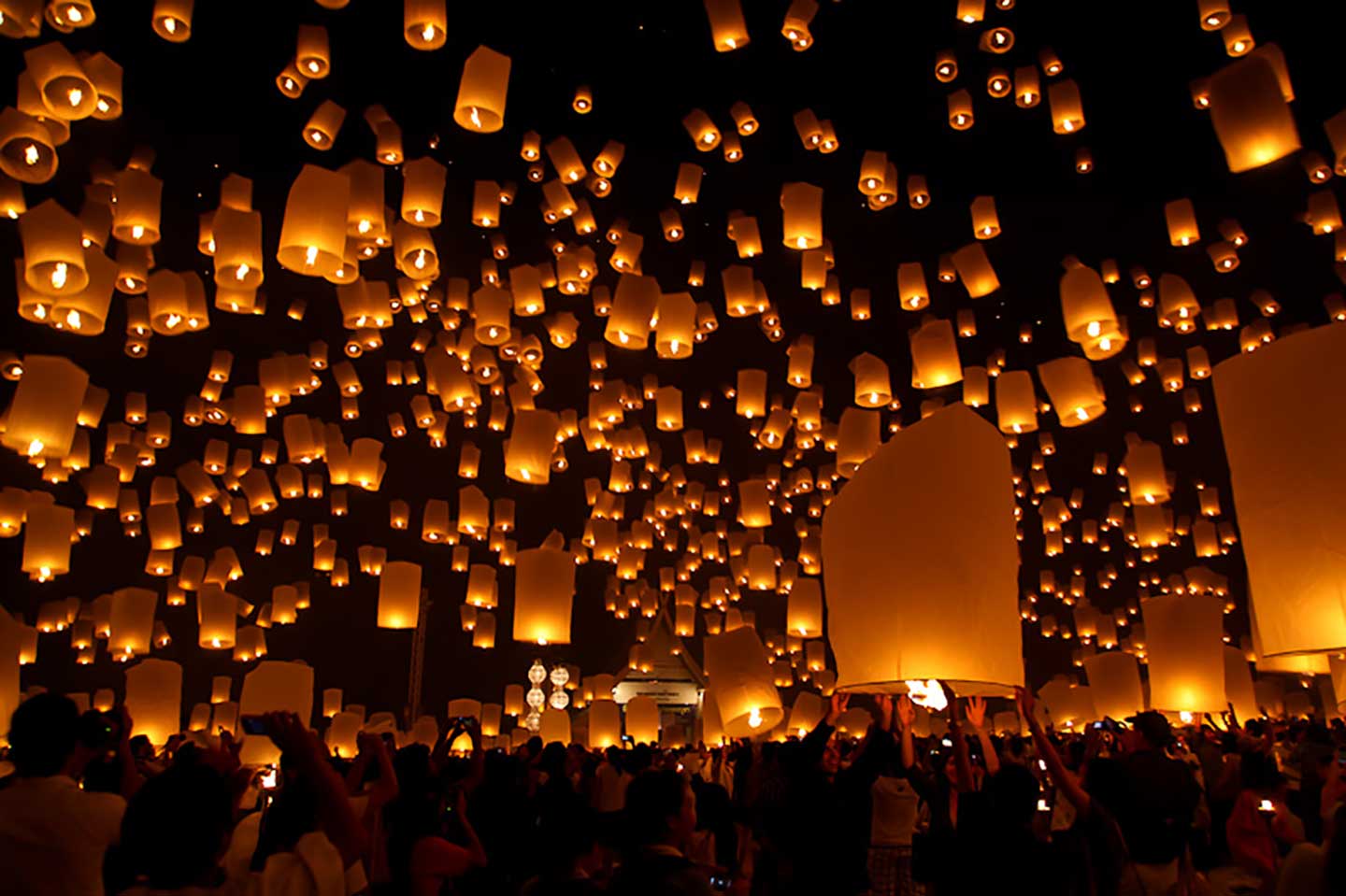 There are many hypotheses as to the origins of this tradition. Some say they were invented by Zhuge Liang (181-234, a famous Chinese strategist from the Three Kingdoms era) who used them as a military means of communication to prevent an enemy raid. Others say that originally, the Lantern festival comes from a popular belief from ancient China. According to this theory, it was possible to see the spirits fly in the light of the first full moon of the year. Their search of the spirit by the lights of torches, those were left in favor of lanterns and the lantern festival was born. Today, the Lantern Festival honors the sky and the stars, the “tai yi” or the “Supreme Unity”. Although maybe religious in origin, the Lantern festival has become a popular festival, which attracts millions of tourists and curious in Taiwan. Another possibility though is that the residents of Pingxi, inside their picturesque valley, have updated a technique inherited from their ancestors. Those, at a time when the region was still infested by brigands, sent up in the air small balloons made of rice paper sheets to report the threat and end the danger. These balloons have since been supplanted by the lanterns which held inscriptions of vows. Over the years, more and more people joined in the custom, to the point that it became an international event. 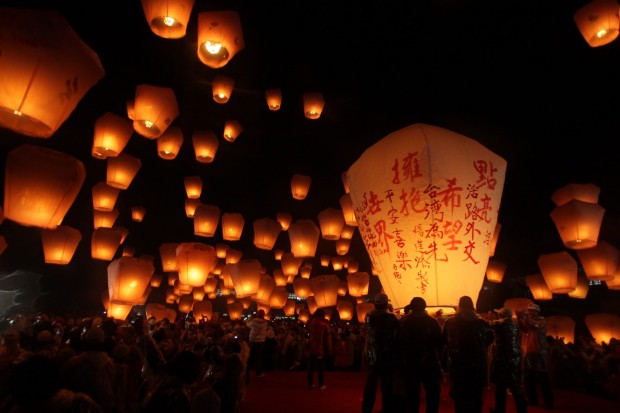 For travelers in search of the most impressive festivals in the world, here is one to mark in your calendar: the Lantern Festival in Pingxi. Also known as the “Little New Year”, the Lantern Festival of Pingxi is live every night for ten days. Near the banks of Pingxi, as the ancestral tradition goes, you have to take a lantern, on which you will write a wish before the blowing it away. Messages in any language, of love, health, wealth… you name it! On this occasion, many Taiwanese take days off to spend with family or for sightseeing. Taiwanese families march together holding lanterns of different shapes and sizes, inspired by the zodiac sign of the year; on their flanks they wrote their wishes for themselves and their loved ones.  Held at Chiang Kai-shek memorial, each year the festival is built around a new theme based on the zodiac animal of the year: countless lanterns decorations, dragon and lion dances, folk art performances, acrobatic shows and solemn processions in front of the temples; a lot of entertainment that the Lantern festival now lasts 3 days. Boulevards, temples and parks are adorned with colored lanterns and lights. There are official launches, where the municipality provides free thousands of these lanterns. Coated in vows marked on the sides, they fly in waves toward the sky. The city finds itself transformed by the appearance of thousands of lanterns of all sizes, sometimes of gigantic proportions, taking the most diverse forms. They represent characters from comic books, cartoons, or Hollywood movies, one more colorful than the other, standing out against the darkness of the night. Feast for the eyes, and taste buds also, this festival attracts large crowds in a friendly and joyful atmosphere.

To see all these lanterns with their flickering lights rise into the night and disappear like increasingly small fireflies, brings tears to the eye of the most hardened! They carry the hopes of so many people, gathered in brotherly tide. 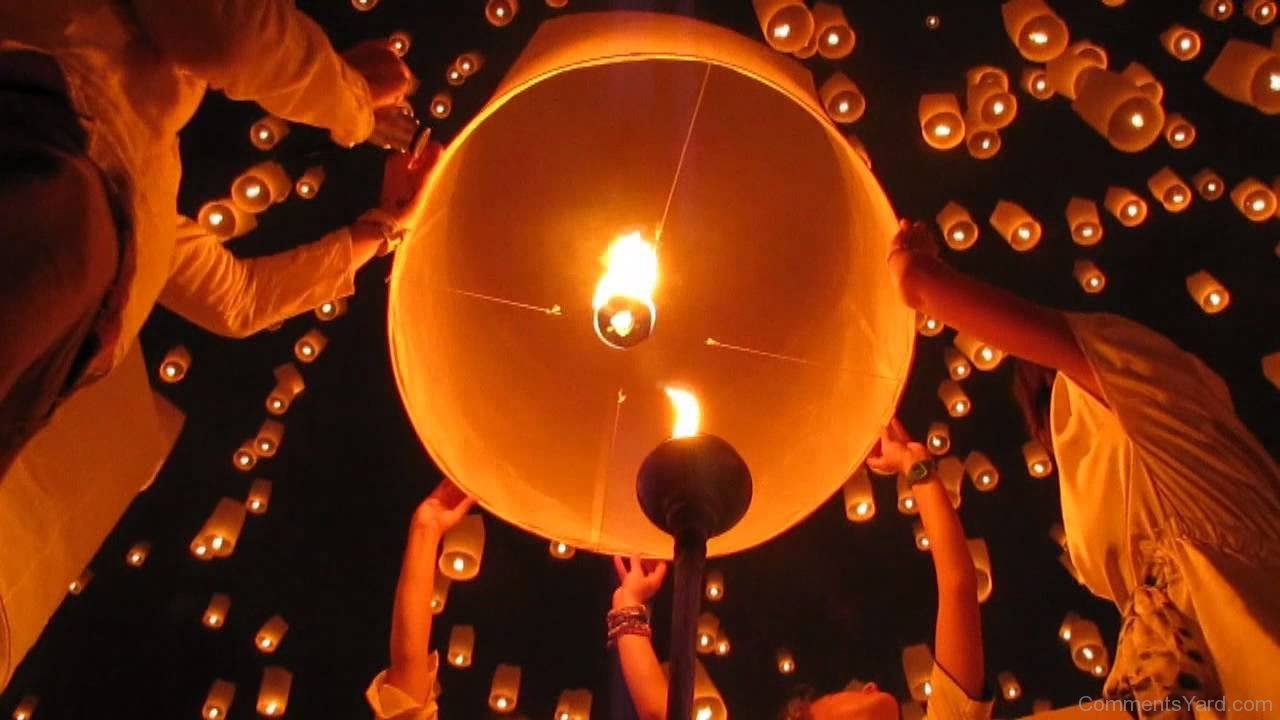 The Lantern Festival is held in Pingxi ‒ easily accessible by public transport ‒ a small town famous for its waterfalls, lost in the hills northeast of Taipei. Taipei, the sleepy little town of the early twentieth century, which is now a fascinating multi-million metropolis. In place of rice fields which, three hundred years ago, stretched further than the sight could reach, stand now fully glazed office buildings, luxurious apartments and modern malls in the wide tree-lined boulevards. Yet deep inside, it remained Chinese: behind its modern façades, culture and lifestyle persist.

Pingxi’s Lantern Festival is held every year ‒ two weeks after the Chinese New Year, celebrating and marking its end ‒ from the 15th day of the first lunar month, that is to say the end of February or early March depending on the year. This year, the festival took place from 22 February to 6 March 2016.

How to get there?

The shuttle stops at a walking distance from the main event; depending on the day of the week, the stop maybe Bashi village or Nanshan Bridge, Shifen.

The bus for return is free between 23:00 10:00am. Last stop for the MRT Taipei Zoo. You can also take the metro to go back ($ 40 TW) For the return it is better to remember where you got off the first time and take the same bus back to the same place to be sure. Note that the human line can seem downright impressive, but do not worry, if you choose to stand up in line (rather than waiting in a seat) it will advance quickly enough despite the hundreds and hundreds of people. Everything is well organized. 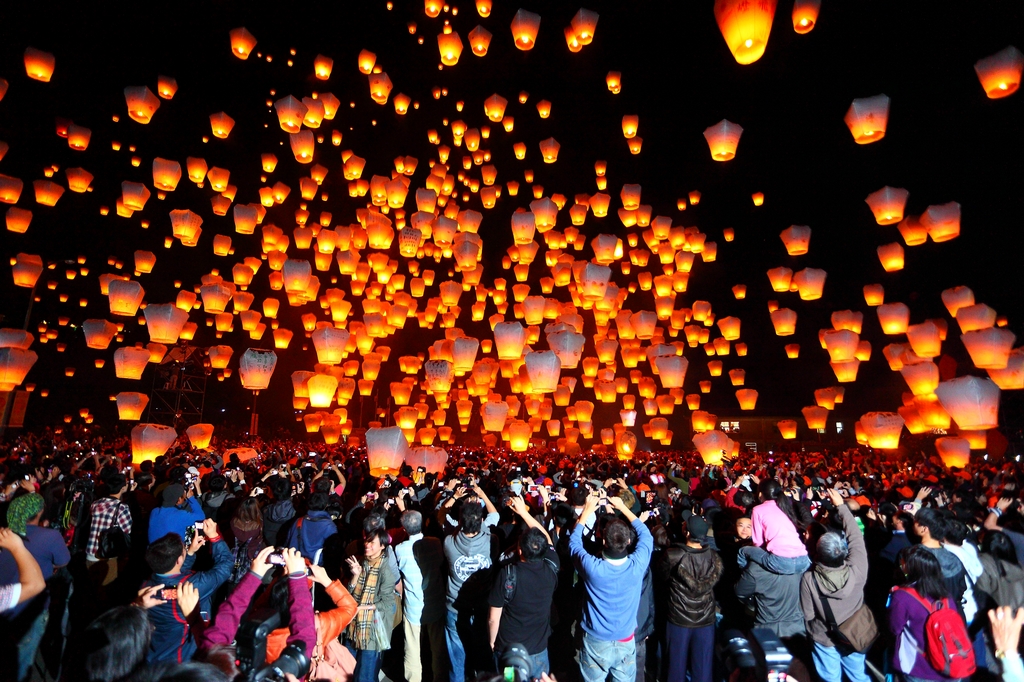 But what is the meaning of all the colors?

As is always the case with Chinese symbolism, every and each color used to paint the lanterns has a specific association. Here is a quick interpretation of the various colors of the lanterns that you may find:

Red: that by far the most popular color, associated with good health.
Rose: as you may have guessed is for love.
White: that is for a bright future.
Blue: great opportunities at work.
Green: specifically for a good professional promotion.
Mauve: for the less inspired, mauve is to ask for Intelligence!
Peach: a good marriage.
Orange: for those feeling unlucky, that’s for Luck.
Yellow: Wealth, obviously
…. and finally, for the undecided: they sell lanterns with 4 COLORS!

To assist in the official launch, you must register in advance. The best is to just admire those official launches. Alternatively, you can launch your own lanterns all day or evening. A lantern costs between 150 to $200 TW or higher depending on the size and the shape you like. You would write vows, wishes or just plain messages on the sides and then you have to find the perfect place to start. The railway is really a popular spot; once there, no entrance fee is needed, access is free.

After a long day and portion of the night launching and admiring the lanterns, you must be hungry and, luckily enough, you can’t find better place to be. Engulfing Pingxi and the festival, is Taipei, that is to say, the Asian cuisine at its finest. The Taiwanese gastronomy has been deeply influenced by those of Fuzhou, Chaozhou , Cantonese and half a century of Japanese colonial rules. Taiwanese food itself has not remained much authentic because its very philosophy emphasizes the use fresh ingredients and light flavors. Taiwan being an island, fish and seafood are available in abundance and therefore occupy a prominent place in the local cuisine. Cooking techniques most often used – the food is seized or returned to the hot wok – preserve the taste and nutritional qualities of the ingredients.While being in Taipei, you can also take the opportunity to visit the Chiang Kai Shek memorial, which is located in the center of city; built thanks to donations received from Chinese all over the world in tribute to the late President Chiang Kai Shek. You may be able to attend the highly ceremonial Changing the guard, depending  on the time of your passage.

During the days of festival, travel prices on the island are particularly advantageous because many tourist hotels offer discounts. Also offered are train and shuttle bus packages at reduced prices. You can make the most of your stay taking advantage of the very interesting rates in terms of transport, accommodation, or even regarding entry prices in tourist sites (such as nature reserves, national parks and museums.)

That is what makes from the Lantern Festival of Pingxi period maybe the best time to visit Taiwan.