Different cultures have different occasions and events to celebrate fun, but in Thailand the art of having fun has transcended all bonds. Upon each visit, you would find yourself immersed in such pleasures that you would not leave this amazing country. Thai people refer to fun as “Sanuk”.

Sanuk has become a way of life for the Thai people who live each day to its fullest and don’t restrict their wishes under the false pretense of worry. Walking along a Soi in Bangkok, you would be able to experience a visible change in the environment as compared to other places you have been to. The country is filled with electric energy that drives and motivates you to enjoy every single second of your visit to its fullest.

The true charm of Sanuk can be experienced during the SongKran festival, which has been recognized as the world’s largest water fight. Outsiders and locals drench each other with buckets of water and give a true meaning to the concept of living in the moment. This festival has its roots in the Buddhist culture, but now taken a completely new meaning free of any religious association. The people participating in the festival are only there to share their joy with others. The spirit of Sanuk can also be seen in the most mundane places, people tend to leave high paying jobs because they fail to enjoy themselves. Thai culture has truly adopted “Fun” as their way of life. It is the only driving force that decides their destiny and choices in life. 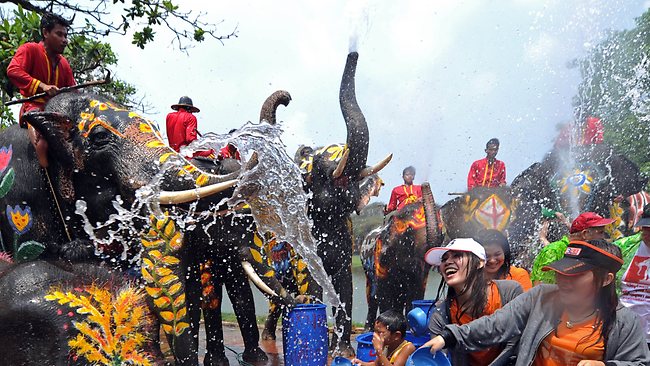 The Sanuk is also evident in the government institutions where you would see the officers and other officials on the streets enjoying themselves as others are doing, but without compromising their responsibilities. When asked from the locals how their spirit of Sanuk is different as compared to other countries is that they simply don’t take anything seriously. The nation as a whole just likes to have fun, they don’t plan for it, and they don’t spoil valuable moments by going into dos and do not.

The fixation of Thai people with fun and good time mainly lies in their faith. The country has a Buddhist majority and it is part of their religious teachings to spread and have fun. Even the language carries certain phrases that strengthen the Sanuk spirit. The most common greetings by Thai people is “Never mind”, “Don’t bother” or “No Problem”. Having such words as the major part of their language also indicates the level of unconcern in Thai people.

Sanuk spirit does not mean that Thai people don’t work hard or shirk their duties, but it is a way of incorporating joy in everything they do. The food, culture, people, religion and weather all retain that spirit of joy and fun that is usually lacking in the western world. Thais believe that accepting your task and doing it with all your strength and commitment creates a sense of belonging and enjoyment that does not come when you are forced to do a certain task.