The capital city of Madrid is the cultural heart of Spain. Boasting of some of Europe’s most grandiose public squares, Madrid clearly identifies as a city with a communal urban style that resonates with its characteristic unrestricted guise.

The adorned crossroads of the city are transitory places where Madrileños convene with fellow citizens for a fleeting moment in time. These public spaces are yardsticks of city life that gauge the momentum of the local life as it moves from day to day, season to season. 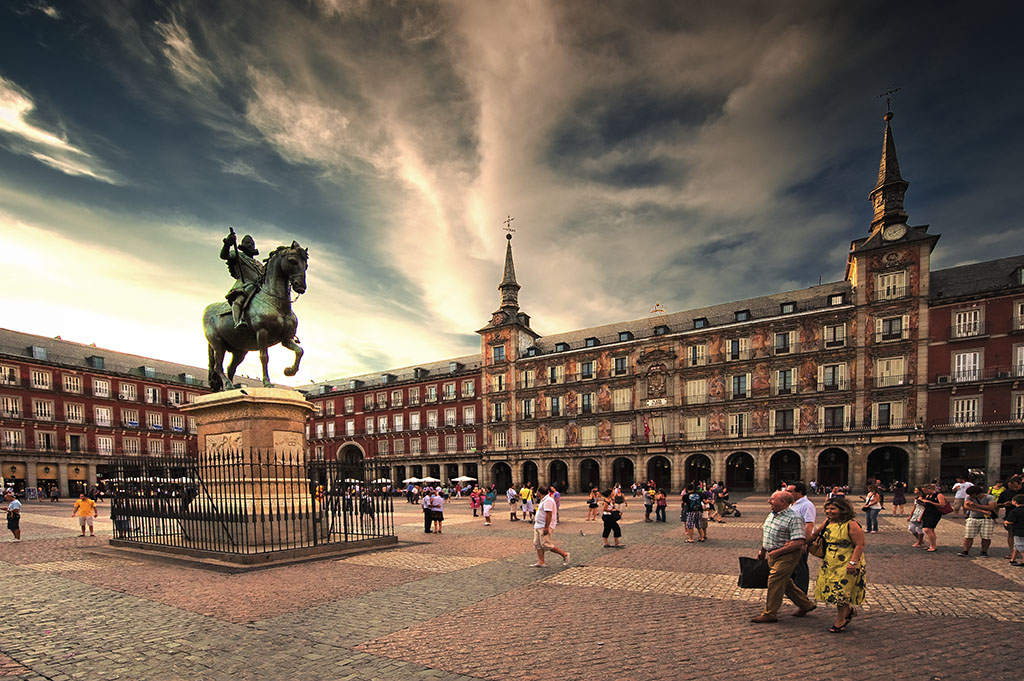 The Plaza Mayor, evidently the most elaborate of them all, is a 17th century marvel surrounded by a peninsula of homogenous buildings with spires of grey slate of characteristic architectural style. At night, these buildings, tinted with frescoes on the northern portico, are rendered bright gold under the city lit skies.

The much cosier Plaza de la Villa displays a vernacular brick and stone barroco madrilène style of architecture that is native to Madrid. Madrid’s city government was located here until recently, where it stood for over three centuries until the medieval hall couldn’t accommodate all the councillors within its walls.

Quite nearby is Plaza de Ramales, rumoured to be built upon the grave of the beloved home-grown artist, Diego Velázquez. However, his remains have never been found, despite concentrated efforts to locate them.

The spacious Plaza Oriente is among the more exquisite squares, with the Palacio Real de Madrid lending a spectacular backdrop, especially at night, when the Palace is illuminated in a royal golden hue.

Plaza de Santa Ana, which carries its legacy as the preferred stomping ground of Madrid’s bullfighting clan, is today the centre of Madrid’s notorious nightlife.  A lesser acknowledged and tranquil square, Plaza de Ramales is the ideal vista for a transient glimpse into the city life. But like anywhere in Madrid, if you are blessed with an extra moment or two, the Plaza is home to a few terraced café’s for an unobstructed Madridian experience.

Plaza Espana, in west Gran Via, is complete with a sprinkling of shady trees and bubbling fountains. This lively plaza is a favorite of both summer tourists and city weary Madrileños. It centres on a monument dedicated to Miguel de Cervantes Saavedra and a bronze sculpture of Don Quixote.

As the sun inches closer to the horizon, the city throngs to Plaza Santa Ana. With a great selection of city’s gastronomical delights and popular water holes, there isn’t a better place to observe and blend in with the humans of the great city of Madrid.