A delicious mixture between the original Hispano-African and American culture, Puerto Rico is undoubtedly the most Latin American island. Facing the Dominican Republic, the Porto Rico wants itself to be much less touristy than its neighbor. Yet with its beautiful beaches, virgin nature, turquoise waters, and cultural heritage, it has everything to attract legions of tourists. 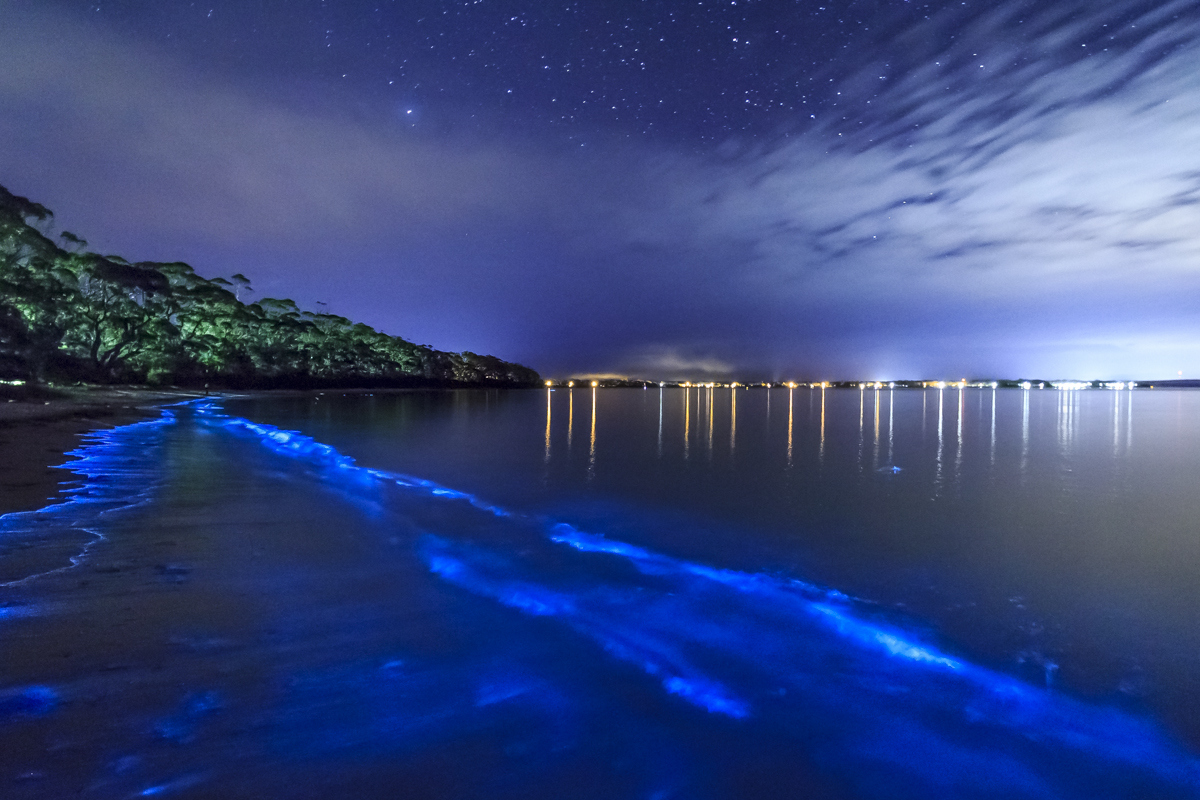 Vieques Island: Then and Now.

The US Navy took possession of Vieques Island in December 10, 1941, three days after Pearl Harbor. Between 1941 and 1947, it appropriated two thirds of the island and displaced thousands of residents. Compensation was offered to holders of title a handful of farmers, mostly white and wealthy. Almost overnight, Vieques has been transformed into one of the main bases of the defensive triangle between Puerto Rico, Florida and Panama. At the end of the Second World War, Puerto Rico was seen in part demilitarized, but the navy remained in Vieques. The inhabitants remained in the island’s center. During the sixty years of the Navy’s official stay in Vieques, 18,000 tons of bombs were dropped on the island and napalm rain from the sky. A worldwide solidarity movement organized mass walks and civil disobedience to force the US Navy to leave the island. The base was eventually closed in 2003. After the base had been closed, the land management was transferred to the US Fish and Wildlife Service (USFWS Federal Agency for Environmental Protection), which classified as “wilderness” hundreds of hectares in the eastern part of the island.

The media no longer spoke of the “struggle for Vieques”; in the headlines, the island went smoothly from “social injustices” to that of “Best Tourist destinations.” And it really is a unique destination. Today Vieques has regained its tranquility and clothed itself in a charming atmosphere. It certainly deserves your attention.

The main attraction that Vieques houses and is best known for is the magical Mosquito Bay, a bioluminescent bay which is a natural wonder to behold. The phenomenon is created when micro-organisms start to glow as the water moves. Microorganisms therefore start to shine, creating a neon effect, for the delight of viewers. The show is stunning and one of a kind.

The best way to observe the phenomenon of bioluminescent bays is to do a night ride by kayak. There are actually several places of this type, but the most spectacular is this one, the Mosquito Bay, which is home to the world’s largest concentration of dinoflagellates (more on them below.) 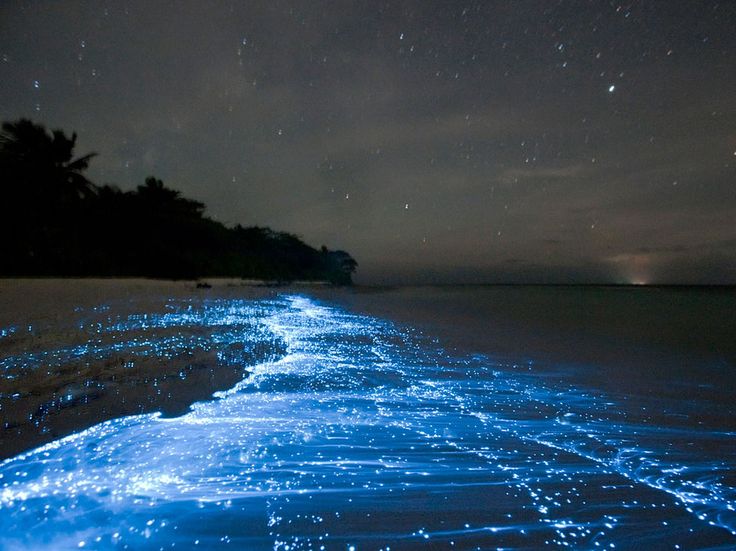 Bioluminescence: when the waves become Blue!

Wave energy can turn into light by the phenomenon of bioluminescence due to the presence of special microorganisms in the water of the bay: Dinoflagellates. They are unicellular aquatic plant organisms (no less than 2200 species are counted) having characteristics which would make them considered as belonging to the animal kingdom. Some of them, however, have the ability to produce a glowing effect, illuminating the bay due to the water movement. The dinoflagellate noctiluca, are capable of bioluminescence when their cell membrane is stimulated mechanically. When they are stirred by waves or water currents, they react with oxygen and produce the bioluminescent reaction. Each paddle stroke forms a fluorescent bluish trail. You almost certainly will have that the temptation to take a dip; unfortunately, swimming is prohibited since September 2011, but you can still try a plunge discreetly.

The romantics will certainly opt to go through a moonless night in a kayak ride or take a midnight swim in the phosphorescent waters of this bay, said to be the best bioluminescent bay in the world. Stir a paddle in the water and it will suddenly become luminous, as if by magic. It is spectacular, especially when the moon is not too bright. But you should know that at times the luminescence decreases significantly without a known reason.

How to get to Vieques Island

The island of Vieques (or Bieke, from the Taino Indian name) known as Isla Nena ( or: baby island) is located east of Puerto Rico. To get there you need to go first to San Juan, capital of Puerto Rico. The cheapest option is to take the ferry from Fajardo, in the eastern tip of Puerto Rico (the crossing takes one hour). There are four or five round trips per day. You have also the option to take an aircraft. Some airlines connect Vieques to San Juan (the flight takes about 25 minutes). The return fares range between US $ 150 and US $ 400. The flights are insured by small Cessna propeller aircraft capable of carrying 10 people.

W Retreat & Spa
Stay at this resort with private beach and full health station located in Isabel Segunda (capital of Vieques Island). This resort on the beach is less than 5 km from the following sites: Plaza Muñoz Rivera, Vieques Ferry Terminal and Port of Isabel Segunda. Conde de Mirasol is 2.4 mi (3.8 km) away. Laze the day away on the private white sand beach at W Retreat & Spa or pamper yourself in the full health center. To make your stay even better, the 156 rooms that the resort counts offer the following amenities : bathrobes and slippers, as well as wireless Internet access (free) and flat screen TV with satellite channels. Other amenities offered include: refrigerator, room service and bedding.

The El Blok is an adults-only hotel. It is located within 3 km of the following sites: Sun Bay Bioluminescent Bay and Black Sand Beach. Navio Beach, and Media Luna are also found within 5 km. This hotel is a non-smoking hotel offering the following: restaurant, outdoor pool and lounge bar. Free Wireless Internet access and free self-parking. Among the amenities and services that you can enjoy: roof terrace, meeting room and concierge services. To ensure your comfort, the 21 rooms offer the following amenities: quality bedding and duvet comforters, as well as wireless Internet access (free) and balcony or patio. Are also available: refrigerator, safe, and shower.

Other Things To Do In Vieques

An islet within a small Caribbean island of Puerto Rico, Vieques has no shortage of charm and attractions. Vieques soon appeared on the radars of hipsters, especially the wealthiest of them. To please them, design hotels have opened their doors. Still, it seems that the island and its 10,000 residents have not lost too much of their authenticity. Vieques kept its charming rusticity. The best way to explore Vieques is to rent a jeep, if you want to go to the most remote beaches, accessible by small dirt roads; or a scooter if you want some fresh air. Prices start at US $ 50 per day for a scooter and US $ 80 for a jeep.

Those driven by nostalgia, will appreciate the Navio Beach where were shot in 1960, the final scenes of “Lord of the Flies”, Peter Brook’s famous film adaptation of the novel by William Golding.

In the western part of the island, you can walk freely in the middle of former military bunkers that were used as ammunition warehouses. On the other hand, the old field of explosives testing, which occupies the eastern half of the island, remains out of reach. Vieques therefore has not finished delivering all its secrets.

Proteins and starches are kings. Red beans and rice, delicious seafood and fried meats are common foods you find on the Puerto Rican tables. The famous suckling pig (lechón) but also pork rinds (chicharrones) are the symbols of a very rich kitchen. The empanadillas also function as excellent small appetizers: those little turnovers are filled with meat or fish then fried. Octopus, shrimp, marlin… Fish and seafood are not just very popular among the population but in addition, they are wonderfully well prepared. Whether a carruchos small salad (conch), shrimp with beer, or fried rice with arroz con jueyes crabs, you taste with pleasure all the food of the island. And for lovers of meats, fried pork skewers, suckling pig and other pieces of turkey will delight your palate. One of the specialties to be tested and tasted: the mondongo, meat cooked with chick peas, potatoes and plantains (plantains, a tropical fruit resembling bananas).

If there is one thing that Puerto Ricans love, it’s a parties and dancing. Here, life is enjoyed to the fullest. Dancing, especially the famous Puerto Rican salsa, is a symbol of celebration and good humor. Same thing for the music which occupies a prominent place in the lives of locals. Of Spanish, African, or Caribbean origins, Puerto Rican dances and music will punctuate your trip so that you will be probably tempted to take some salsa, merengue or areyto (dance of the Taino people) lessons.